The Theatre
of the Empire of Great Britaine

Maps of England, Wales Scotland and Ireland as well as maps of the English and Welsh Counties, the Islands and the Irish Provinces 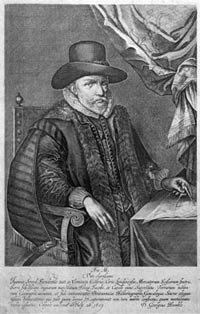 If you go through the little village of Farndon in Cheshire today you are unlikely to see anything to draw your attention to the fact that John Speed was born there. Perhaps, given time, much will be made of the event but today, as in 1552, the happening is, and was, taken as an every day event and John was called John after his father and as soon as he was old enough sewed up the similarity by following in his father's fashion, the trade of a tailor.
At the age of 18 John Speed was admitted to the freedom of the Merchant Tailor's Company in London. He rented somewhere to live and a garden in Moorfields for twenty shillings a year.

At the age of 20 he married and continued his manual employment in the business of garments. Doubtless he was well employed for these were the days of Queen Elizabeth when colour and style in dress left a vivid and interesting image in our island history.

Undoubtedly a fine family man, John Speed could apply only his spare time to history and mapmaking, for tailoring brought in the money to bring up his brood of twelve sons and six daughters. His son Samuel in later years became implicated in a plot against Cromwell and was forced to flee the country for the West Indies where he joined some buccaneers and later became a sea chaplain.

Perhaps we would not have seen the fine maps of John Speed if a courtier of good literary taste and discernment had not used his influence to further the careers of talented men. The courtier was Sir Fulke Greville, the first Lord Brooke, a lifelong friend of Sir Philip Sydney.

Thus is was in 1598, with Speed at the age of 48, that Queen Elizabeth gave him a Waiters room in the custom house and at last Speed was able to pass onto us what had been in his mind.

He first devoted himself to writing a history and preparing a series of county maps of England and Wales. Between 1605 and 1610 he collected material including manuscript maps, coats of arms, portraits, drawings of antiquaries and rubbings of coins which he passed onto Jodocus Hondius in Amsterdam who engraved most of the maps for the Theatre of the Empire of Great Britain. During this time Speed must have travelled extensively in the British Isles acquiring information for his unique series of town plans that appear on his maps, which are the earliest recorded plans for many of the towns featured, Proofs of his maps were issued between 1608 and 1610 and in 1611-12 all 67 maps were published in atlas form under the title The Theatre of the Empire of Great Britain.

It was a most successful publication. Many copies sold and further editions were to appear for over one hundred years. Speed also prepared maps of the countries of the world, These appeared in A Prospect of the most famous parts of the World.

Maybe you will find a suitable memorial to John Speed at St. Giles, Cripplegate where John Speed finally came to rest on the 28th July, 1629. He was aged 77 and had suffered blindness and gall stones in a none too enlightened era. The good work he did, however, lives after him and the pleasure derived by discerning collectors who own one of more of his original maps is adequate evidence of his being one of the virile hard-working and inspired stars of the Elizabethan era.

How to Date John Speed Maps

John Speed's maps were so popular during the 17th and 18th centuries that they were published many times. This is a rough guide to the various editions of his atlas.

A very good way to date a John Speed map is by the style of the woodcut initial that starts the descriptive text on the reverse side of the map. The style changes with each change of publisher

THEATRE OF THE EMPIRE OF GREAT BRITAINE

The story of how stock of the London map trade was acquired or passed from one to another is a fascinating one. The relationships between surveyors, mapmakers, engravers, publishers and mapsellers is often complex. I hope the following helps to illustrate the history of John Speed's map plates and a few other relationships.

The Story of the Copper Plates

His daughter married John Overton Purchased the Speed plates from William Humble in 1658 - 9. Did not use them but soon sold them to Roger Rea the elder and younger.

Roger Rea, the elder and the younger

Married the daughter of William Garrett Acquired stock of Peter Stent in 1665 Acquired Speed plates in 1700 from Christopher Browne. Disposed of his stock to his son Henry Overton in 1707.

Acquired the Speed plates and published the last edition in 1770.

You may come across a few John Speed maps with colouring described as early. The publishers, however, did not advertise or sell the atlases coloured unlike some of the 17th century Dutch map publishers. No doubt you would have had to employ a colourist before the maps were bound into the atlas. The majority of John Speed maps arrived in the 20th century in an uncoloured state. Modern colouring is quite acceptable and the majority of present day collectors like their John Speed maps to be coloured. There are those, however, who would prefer to have a specimen as it was when published. The quality of the modern hand colouring is in my opinion extremely important and poor unattractive modern colouring can greatly reduce the value. I have seen some very poor modern hand colouring and it makes me despair. Did you know that many of the coats of arms on John Speed's maps are colour coded?

Text on Verso of Maps 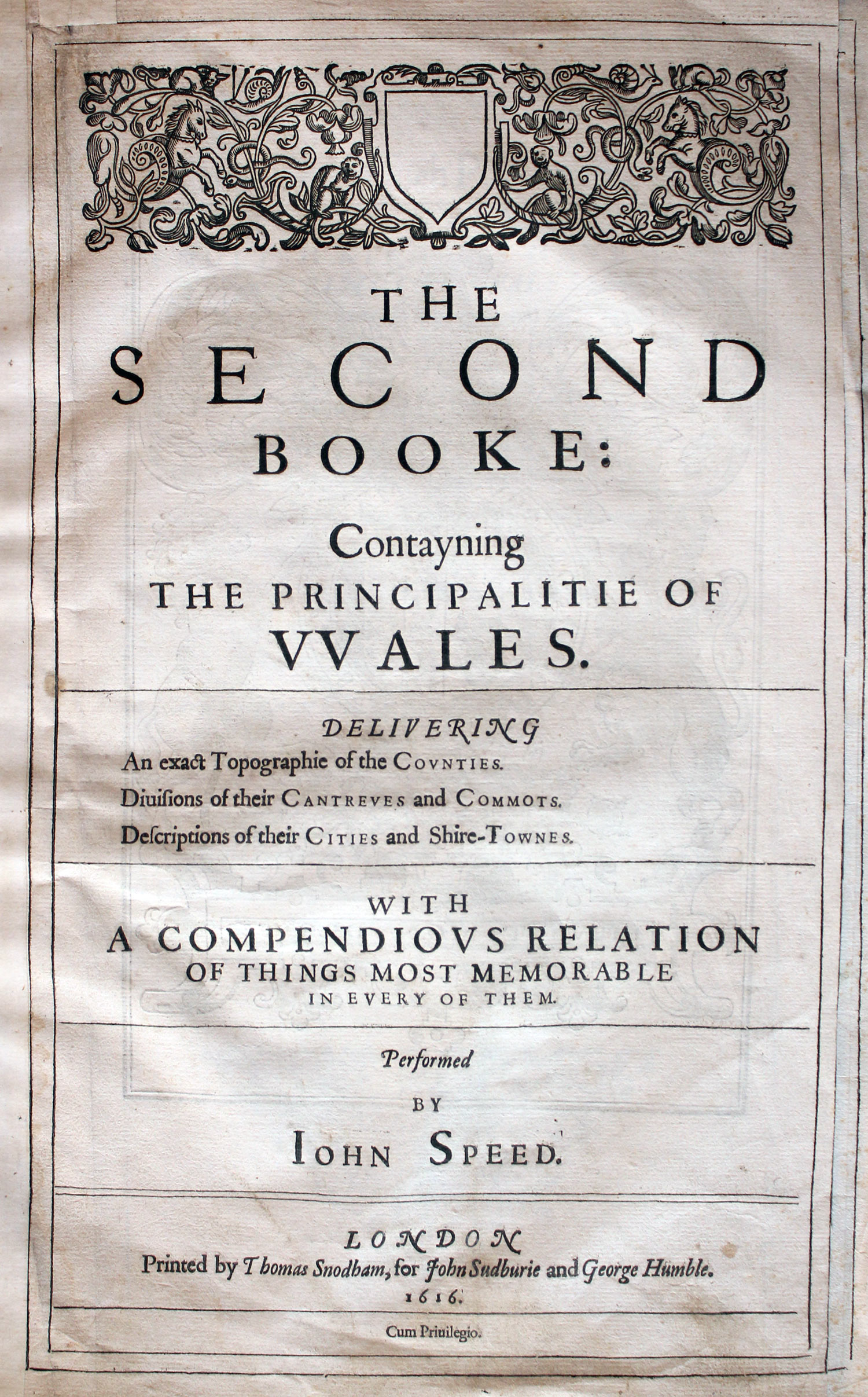 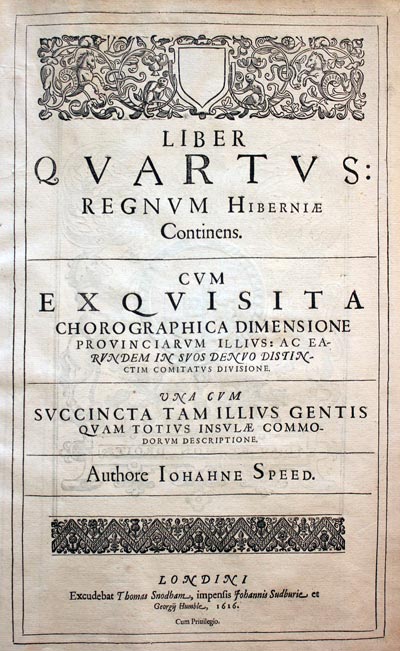 There are modern reproductions of John Speed maps that the collector should be aware of. It is unlikely that once you have handled an original map by John Speed you are unlikely to be caught out by these reproductions but do take care when purchasing framed maps as it is more difficult to see the features.

I get two or three telephone calls a month about John Speed maps that people who have found them in their loft or been left them. Very often they are from a series of reproduction maps that have been sold widely for many years. They are very easy to spot and usually I can answer a telephone callers concerns by a few questions, such as. What is the paper like that the maps are printed on? If the answer mentions parchment then the answer is simple. It is a modern reproduction of little or no value. The map has no text on the back and no centre fold and the overall colour of the paper is brown. These maps have been sold in their thousands. I remember seeing them back in the 1970's in stationers shops and perhaps Smiths, folded into paper wallets with a transparent panel on the front showing part of the map. The fold lines are usually still evident.