The Blaeu Family of Mapmakers

17th century cartography at its very best from this Amsterdam publisher

One of the greatest names in early map making is that of Blaeu. The business flourished for over forty years in the city of Amsterdam . A publisher producing the very best of 17th century cartography. The company started in 1596 making instruments and globes but soon expanded into publishing maps and charts. His first son Joan was born in about 1599 who by 1610 had six brothers and sisters, Sijtge, Jacob, Stijntgen, Catharina, Willem and Cornelis.
It was in 1630 that Joan joined his father in the map business and in 1631 their joint names began to appear on their maps. In 1634 Joan married Geertruid Vermeulen Pieterdr and it was about this time the output of the business was greatly enlarged with the publication of wall maps, globes, charts, town plans and atlases. In 1637 the print workshops moved to larger premises on Bloemgracht where the number of printing presses was increased to nine. The father and son partnership ended with the death of Willem in 1638. Joan continued to run the business with the help of his brother Cornelis but it was to be quite a short partnership lasting only six years as Cornelis died in 1644 at the age of 34.

Joan was appointed official cartographer to the East India Company. A position his father had held previously. The business continued to grow as Joan extended his now famous Theatrum to 12 volumes and by 1668 it is believed that he was employing about eight men to produce this magnificent work in four languages, Latin, French, Dutch and Spanish. Each set of atlases having some three thousand pages of text and six hundred different maps, most of which were hand coloured. At the same time Blaeu was also publishing his magnificent town atlases. The publication of charts by now had ceased but was carried on by other Amsterdam mapmakers such as Colomb and Jacobsz.

It was as Dr. Joan Blaeu that he help important positions, serving on the council from 1651 to 1672, appointment as Captain of the Civic Guard in 1650 and in 1651 'Overman' of the Handbow Archer's Guild, Commissions of Fortifications in 1655 and of the ammunition magazines in 1659. By this time Joan and Geertruid had six children, Willem, who later became an advocate, Pieter, Maria, Elisabeth, Joan II, and Louisa. Pieter and Cornelis helped their father Joan in the business.

In 1667 Joan opened another printing house in Gravenstraat. It was to last only five years as at 3.30 on the morning of February 23rd, 1672 the premises caught fire. The building was destroyed along with the stock of books, atlases, paper, copper printing plates, type and equipment. Seven months later on 10th September, 1672 owing to political pressures Joan was dismissed from the council, on which he had serves twenty-one years, along with fifteen other councillors.

It is most probable that these two distressing events were responsible for his decline in health and his coming to rest on 23rd December, 1673, aged 75. The business was carried on by his sons Joan II and Pieter. Many items were auctioned and in 1683 the globemaking part of the business was sold to J. van Keulen. The sons published a number of maps but the business never regained the influential position it had held in earlier years. Pieter died in 1706 and Joan II in 1712.

Listen instead of Reading

An Excellent Book for the County Map Collector

If you can find a copy

When I started collecting and selling maps back in the 1960's there were very few reference books on antique maps. The first book I remember buying was Maps and Mapmakers by R. V. Tooley. Full of wonderful information but over the years there were periods when it was out of print. The Antique Collectors Club used to produce a large range of books on all kinds of antiques and in 1983 - BRITISH COUNTY MAPS by YASHA BERISINER was published. To the best of my knowledge there has not been another book like it published. A most useful and informative work and essential for the avid county map collector. I think there was just the one edition. If you can get hold of a copy at a reasonable price my advice would be - Buy it. There is a link below that will search Amazon for copies on sale.

My well used copy pictured on the right still has its distinctive red cover illustrating Cambridgeshire by John Speed. 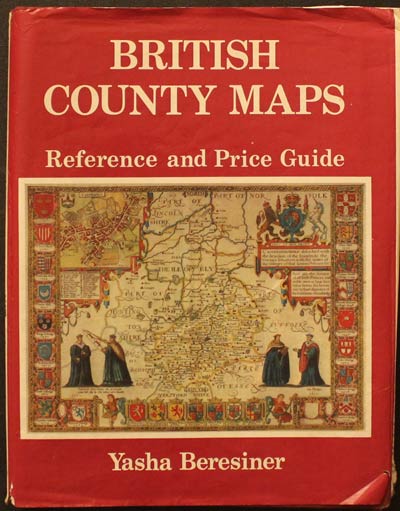